The rise of private car ownership, the baby-boom and post-war reconstruction were catalysts for drastic urban planning interventions around the world, a fashion that inevitably reached New Zealand. Metropolitan Wellington’s population increased by 63% in the space of two decades from 1945 – and was projected to reach 398,000 in 1981 (wildly inaccurate – this did not happen until 2014).

This growth, largely concentrated in the Hutt Valley and Porirua, was a headache for planners, but it also gave the civic leadership confidence to invest. It stimulated a decade of radical proposals for the capital, and came close to destroying much of what Wellingtonians now love about the city.

By the late 1950s rapidly increasing traffic volumes on the Hutt Road (comparable to Adelaide Road today) caused a fear of gridlock, and work on the first part of the Urban Motorway from Ngauranga to Aotea Quay started in 1959. 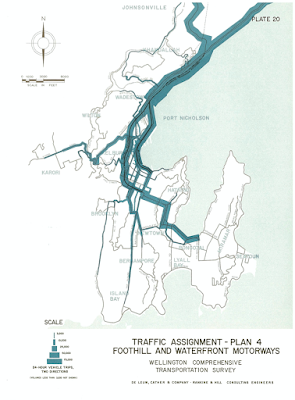 There was bitter debate about the next phase of the road, between a ‘foothills motorway’ route through Thorndon, and one along the waterfront – the latter preferred by the City Engineer and the Ministry of Works. In 1960 American transport consultant De Leuw, Cather & Company was commissioned by the Wellington Regional Planning Authority (a predecessor of the Regional Council) to resolve the matter and create Wellington’s first Transportation Master Plan.

Despite its being the cheaper option (at £13,000,000 cost – close to $570 million today) the initial report in 1963 made the waterfront route look as unpalatable as possible. Projected traffic volumes would require ‘a double-decked structure approximately 40 feet [four storeys] in height with three lanes in each direction’. This would have run from Bunny Street to Cable Street, with offramps required at Kings Wharf, Post Office Square and Mercer Street. The report warned of conflict between the motorway and what was still a working inner harbour, and the impact on the amenity of the waterfront, pointing out how quickly San Francisco’s officials had come to regret building their new freeway above the Embarcadero.

The foothills route was duly recommended, even though it was projected to cost almost 50% more and need streets of houses demolished, with the Mount Victoria tunnel to be duplicated during the first phase of works. The time required to dig the Terrace Tunnel meant Te Aro would need a one-way system to speed up traffic (half a century later the Council has voted to slow traffic down), with southbound vehicles routed up Cuba Street. 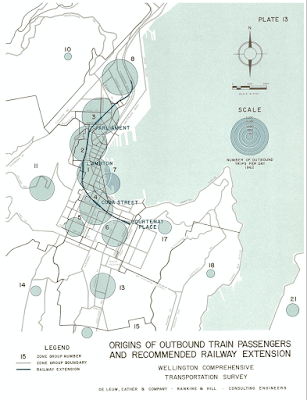 Public transport was also considered, with a recommendation that once the motorway was completed the railway should be extended in a 3km subway to the end of Courtenay Place – with underground stations at Parliament, Lambton (located under Boulcott Street), Cuba Street and Courtenay Place – all for £11,000,000 ($480 million in 2020).

As proposed the complete the motorway would have buried half the Basin Reserve under motorway offramps, a deep trench cut across the top of Te Aro and a ‘full-diamond interchange’ at Taranaki Street – designs familiar to Wellingtonians who successfully defeated the Tunnel Link proposals a quarter of a century later.

The focus on roads alarmed Wellington’s retailers. They feared that greater mobility would send shoppers to more convenient destinations outside the city, and commissioned a rival proposal from architects Gabites and Beard. ‘Precinct Planning for Wellington’ (released in 1965) had some bold predictions, with ‘public transport vehicles running on air cushions rather than rails’ and ‘combined air and ground vehicles in general use’ by the year 2000. But the pedestrianisation of large parts of the CBD, rather than a focus on cars, proved popular with Wellingtonians, and this influenced the final version of the Comprehensive Transport Plan in 1966, including retaining the Basin Reserve.

With the transport masterplan complete the City Council was free to focus on transforming the CBD. In 1957 Robert (‘Terry’) Kennedy arrived at University of Auckland to take the first Chair of Town Planning. He was retained as a consultant by Wellington City Council from 1965-75, and the 1965 Draft Town Plan clearly reflected his previous job remodelling Britain’s blitzed cities.

Some ideas were developed from the De Leuw report and ‘Precinct Planning’, including Cuba Mall, and the Farish Street Extension which pushed Victoria Street through to the top of Te Aro – to feed a future Western Suburbs motorway running through a tunnel from the top of Aro Street to Karori.

The plan was also critical of central Wellington’s small commercial plots and streets laid out for the era of deliveries by horse-drawn vehicles, now resulting in increasing conflict between vehicles and pedestrians. European cities were able to ‘take advantage of’ extensive bomb damage to unleash ambitious redevelopments – and Wellington was to follow suit with the ‘Willis Street redevelopment area’, a three tier ‘superblock’ similar to London’s Barbican, to tackle ‘the bottleneck between Stewart Dawson’s corner and the sea’.

The development would have been enormous, stretching between the top of Plimmer Steps and the waterfront. The existing street layout was to be maintained but built over, with garaging and warehouses at ground level, and car parking above them, accessed via ramps from Jervois Quay and a Willis Street flyover connecting Victoria and Boulcott streets. Above that to be a pedestrian deck, with shops, offices and hotels. 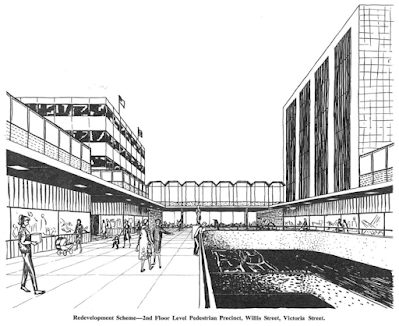 The sheer chutzpah of the Town Planning Committee’s report was admirable: the Willis Street superblock was ‘economically feasible’ and would ‘rehabilitate the centre of Wellington’ in combination with the proposed Civic Centre and new Cuba Mall. The City Engineer pointed out to doubters ‘this sort of integrated development is already taking place in larger cities overseas’.

The project stumbled at the first hurdle: the population growth projection was criticised as overly optimistic (a failing among Council officials), and the indicative £50,000,000 cost ($2.1bn in 2020) was seen as wildly unaffordable. Councillor Turk called the proposal ‘a Utopian flight of fantasy’ – and by the mid-1970s Kennedy’s departure from WCC’s payroll and the city’s stagnation meant the idea mercifully faded into the long list of municipal what ifs.

The idea of a municipal precinct dates back to the 1942 Wairarapa Earthquake, which led to the demolition of the old city library building and technical college buildings on Wakefield Street – now the site of the Council’s closed Civic Administration Building and empty Municipal Office Building (or MOB). Work started on MOB in 1946, and the popular lawn in front of the building was referred to as the Civic Centre. 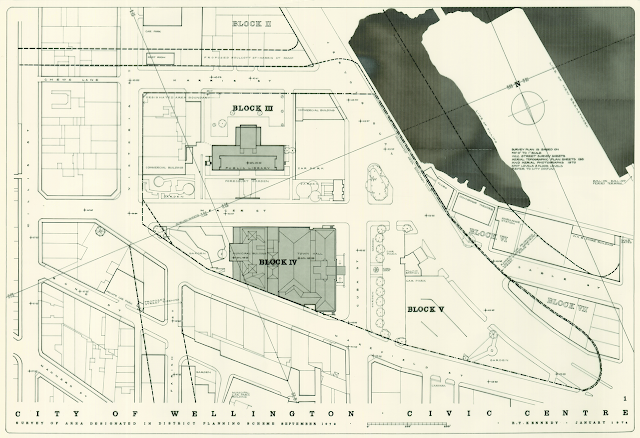 The Council had gradually acquired land at the harbour end of Cuba Street from the 1960s, and the section of Mercer Street between the Town Hall and Central Library was often closed for civic festivities, so it was a small leap of imagination to pedestrianize the space. Terry Kennedy and Ken Clarke (the council’s City Planner) embarked on a scheme to banish vehicles and create a ‘true and pleasant centre of the City of Wellington’. 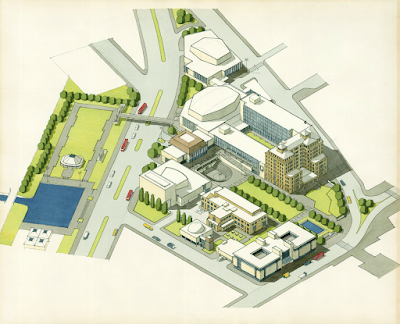 The masterplan that emerged had all the hallmarks of European post-war design. The demolition of the seismically prone Town Hall would clear the way for a decidedly Soviet looking 10,000m² office building; a conference facility was to be built on the corner of Harris Street and Jervois Quay; and pedestrian subways would give access to the waterfront and the new shopping arcade that was to be built over Mercer Street through to Willis Street. Kennedy realised changes in opinion and finances would alter the plan, but he suggested a 15 year development programme – the new library and conference centre were to have been completed by 1986.

Instead Mayor Michael Fowler championed the construction of the new concert hall: it was commissioned in 1975, but the challenging ground conditions delayed work. The building was opened in 1983, by which time campaigns to promote the heritage and acoustic value of the old Town Hall had made its removal untenantable, leaving the two buildings uncomfortably close to each other. The waterfront had been transformed from potential motorway route to an increasingly popular open public space – and a rethink for the precinct was required. 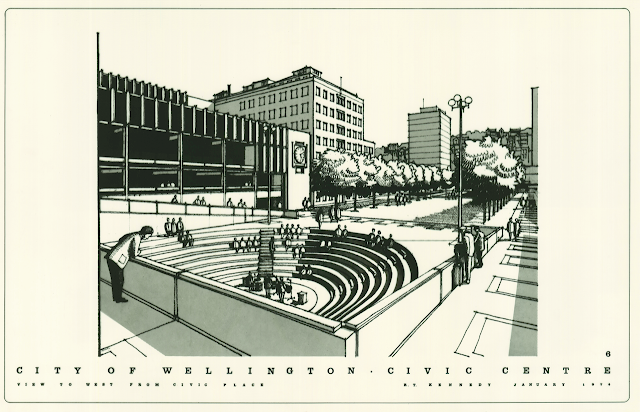 While the development Kennedy proposed would have been built at the height of Brutalism in New Zealand, some of the core ideas from the 1974 masterplan shaped today’s Civic Square, including turning the 1937 library building into a ‘City Gallery’. This stimulated the council in 1980 to create exhibition space at 65 Victoria Street, before demolishing the building and using the site for the new Central Library (another Kennedy recommendation). Interconnected elevated walkways linked the library and council buildings – until they were deemed seismic risks earlier this decade – and the space enjoys good sunlight.

Kennedy died in 1997, with his superblock vision for Wellington’s civic precinct largely realised, and especially the underground parking and wide pedestrian expanses. With the Civic Administration Building likely to be demolished, perhaps the lawn in front of the municipal offices which coined the precinct’s name could be restored – bringing the Civic Centre concept full-circle?

First published in the Summer 2021 issue of Capital.