Earthquakes may be a way of life for Wellingtonians, but the city has been home to cutting edge engineering developments since the 1960s that have helped keep us safe. So here are four buildings that stand out as globally significant seismic engineering designs – with the wider public that see them every day largely unaware of their significance.

First use of ‘capacity design’

Wellington’s post-war baby boom and predictions of enormous population growth unleashed a new generation of high-rise apartments. To the casual observer these 1960s behemoths look relatively indistinguishable, but in the world of seismic engineering the large block at 20 Oriental Terrace is a global icon. 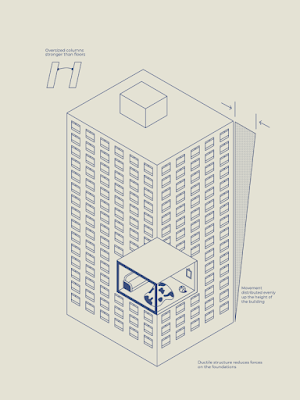 Design work on Jerningham Apartments started in 1964, with the tall structure stepped back from the street to take maximum advantage of the town plan’s height limits. Developers Wilkins and Davies were experienced hands in the Wellington apartment market, having completed Wharenui further along Oriental Parade in 1960, and Hollings & Ferner (a relatively new Wellington engineering practice) was engaged as the project’s structural engineers.

John Hollings was interested in improving the performance of concrete frame buildings in earthquakes, which typically failed in a brittle manner as movement occurred in a single storey low down, ultimately risking a ‘pancake’ collapse. He envisaged the new development as a tall building with movement evenly distributed up the height of the structure, and flexing occurring in carefully specified areas, a concept he described as ‘lead hinges’ protecting the ‘glass-like columns’ from damage.

Jerningham’s concrete columns were strengthened considerably relative to the beams so they would not fail. The connection of the concrete beams to the columns including extra steel reinforcement to allow them to flex and dissipate energy without losing integrity during a big shake. The precision of the calculations in the era before calculators or computers was extraordinary, but Hollings was still not fully satisfied as to the performance of the junction between the floors and internal columns. He had his team build a full-scale rig at the building’s base to undertake testing at the start of construction – the design passed with flying colours.

Holling’s structure had significantly better seismic performance compared to the conventional approach proposed by the developer; it was also commercially more attractive. The revolutionary design reduced the scale of the foundations required, saving $100,000 on the original cost estimate (around $8 million today). And by opting for a low-profile floor system he had fitted in an extra level of apartments for the developer – all of which helped increase the affordability of the high-rise housing needed to accommodate Wellington’s steep population growth.

The strong columns, weak beams design philosophy sounds like common-sense now, but it was a revolutionary concept at the time. It was refined by the University of Canterbury to become known as ‘capacity design’, and is now a fundamental aspect of almost all seismic design codes around the world. Meanwhile recent property listings state Jerningham has been assessed as 84%NBS – better than some apartments a third of the building’s age.

In 1951 a young refugee family arrived in Wellington, sponsored by Catholic students at Victoria University of Wellington. Tom Paulay, 27, had fled Hungary three years earlier, after his two years as a cavalry officer fighting the Red Army on the Eastern Front had put him at odds with the new Communist regime in Budapest. Paulay completed his engineering degree in Christchurch and returned to Wellington, where he spent eight years as a consulting engineer, before taking a 35% pay cut to return to the University of Canterbury as a lecturer on structural design in 1961. 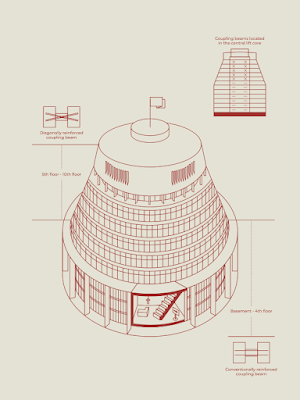 1960s New Zealand was a curious mix of forward-thinking confidence and lingering attachment to the Mother Country – epitomised by plans to replace the rat-infested, earthquake-prone 1871 Government Buildings at the southern end of the Parliamentary Estate. The Parliament Building’s incomplete Edwardian design was viewed as old-fashioned, and Britain’s star architect Sir Basil Spence was engaged to make the case for something more progressive. Construction on his circular, modernist tower (quickly dubbed ‘the Beehive’) started in 1969, just as Paulay was completing his doctorate on the vulnerabilities of interlinked shear walls during earthquakes.

Paulay’s research was perfectly timed: damage from the 1964 Alaska Earthquake had confirmed his hunch that the existing approach to reinforcing the beams coupling shear walls was inadequate, with the side-to-side rocking of the building stretching these links diagonally, producing large X-shaped cracks that significantly weakened the structure. The improvement Paulay landed on was simple: introduce steel reinforcement in an X-shape to mirror the stress from the building’s movement, and allow ductile steel to take the load, rather than brittle concrete.

New Zealand’s reputation for earthquake engineering was growing rapidly – Paulay’s peers would greet him at international conferences by crossing their arms over their heads, imitating his new design. A culture of co-operation between academia, the engineering profession and government was spurred on by the 1968 Inangahua Earthquake on the West Coast, the strongest felt in the capital since 1942, and encouraged by the Ministry of Work’s enthusiasm for seismic design innovation, under Chief Structural Engineer Otto Glogau.

It began a new period where we stopped copying what was coming from California and became an innovative world-leading laboratory for seismic design.The Ministry was overseeing the construction of Parliament’s new Executive Wing, and Glogau immediately requested that the new ‘diagonally reinforced coupling beams’ be included for the remainder of the building; the circular concrete lift core was modified to accommodate the new design from Level 5 upwards.

Half a century later, Paulay’s coupling beam reinforcement design is global standard practice. Yet with the steelwork encased in concrete it’s invisible to the general public: a hidden witness to the Beehive’s place in earthquake engineering history.

First use of lead rubber bearings

The Wellington Urban Motorway ripped a long gash though Thorndon when it was built in the 1960s. Whole streets disappeared following the government’s compulsory purchase of properties, leaving awkward slivers of land adjacent to the roaring traffic, and too far from the CBD to be attractive to commercial developers – but the perfect location for the new Ministry of Works headquarters, which was to be named after William Clayton, the architect of the 1876 Government Building at the other end of Molesworth Street. 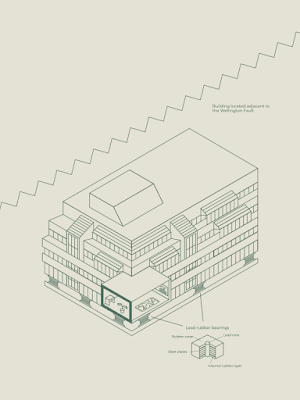 The building was located on the site of May Street, a cul-de-sac off Tinakori Road lost under the motorway, and would have a long, low form sympathetic to the surrounding houses. It was also 100m away from the Wellington Fault – and an ideal candidate for Otto Glogau’s interest in seismic isolation. The Department of Scientific and Industrial Research’s Ivan Skinner devised sacrificial steel dampers: then a conversation in the staff tearoom prompted his metallurgist colleague Bill Robinson to hunt out a metal with better damping qualities. Two hours later Robinson had identified lead: its low melting point could turn pressure from an earthquake into heat, it had the right crystal structure to ensure ductile behaviour at low temperatures, and was cheap to buy at a high purity for consistent performance.

Robinson’s genius lay in using the combined properties of simple materials in his revolutionary ‘lead rubber bearing’, where a lead core is contained by a ‘spring’ formed by layers of rubber and steel, which allows lateral movement. The elastic properties of rubber isolate the building from the ground movement and return the bearing to its original position once shaking has stopped, the steel plates maintains the bearing’s shape, and the lead core damps the action.

The experimental bearings were tested by a second-hand Ministry of Works Caterpillar bulldozer that was modified to power a rig called ‘MASHER’ – the Machine for Simulating Earthquakes. By 1978 the concept had been proven, and 80 isolators were despatched to the construction site at the top of Molesworth Street. The building was something of a prototype, with an overly-strong structure in case the isolators didn’t work, and too little ‘rattle’ space for the building to move in a major shake (this was later rectified by Beca).

Bill Robinson died in 2011 having spent most of his working life in Wellington. Robinson Seismic (still based in Lower Hutt) is a global leader in seismic protection devices, with their lead rubber bearings (like those visible underneath Te Papa) manufactured under licence around the world; their effectiveness has been proven by countless earthquakes. The William Clayton building was refurbished and extended five years ago: one of its 1970s vintage isolators as removed for testing by Robinson Seismic and performed like it’d just rolled off the production line.

Older Wellingtonians will remember the partially completed steelwork of the BNZ Tower (dubbed ‘Darth Vader’s pencil box’ by Ian Athfield) during the late 1970s. The Boilermakers’ Union’s strikes turned a 48 month construction programme into 11 years, and drove up costs fourfold by the time the building was completed in 1984. 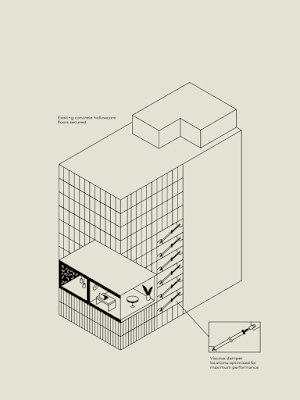 The saga contributed to the Lange Government’s labour market reforms, which in turn fuelled an economic boom. Understandably the 1980s property developers weren’t keen on steel, opting for precast concrete floors made with non-union labour. Quick to install, they were manufactured offsite, lifted into place by crane, and held in situ by the adjacent beams and the building’s structural frame – like very rigid sardines in a tin.

Today central Wellington has dozens of buildings with precast concrete floors. The 2016 Kaikoura Earthquake’s long, powerful shaking hit these structures particularly hard, with flexing in the buildings’ frames damaging the edges of the concrete units. Built in 1987 on rock and to higher ‘investment grade’ standards as Trust Bank’s new home, 8 Willis Street – opposite the BNZ Tower (now the Aon Centre) fared better than many of the CBD’s buildings from the 80s and 90s, and came through the shake undamaged.

So what makes the building next to Stewart Dawson’s Corner so interesting? Many of the structural upgrades incorporated reflect lessons learned from the Kaikoura shake – more concrete to stiffen the building, and improvements to the floor units’ seating. However the building’s new tenants will quickly spot large pistons running diagonally from floor to ceiling. These ‘fluid viscous dampers’ were first developed for NASA’s Apollo moon landers, and work like giant versions of the shock absorbers in a car, stiffening the building when it starts to move.

Compared with the simple concept of base isolation, configuring the optimum damper arrangement in a relatively tall structure like 8 Willis Street is complex. Install too many dampers and you risk creating unwanted forces in the structure; too few will leave the building vulnerable during a large shake.

Previously the modelling approach would have been trial-and-error: running different configurations through a range of historical earthquakes, adjusting the damper arrangement, and rerunning the tests. The breakthrough is engineering firm Beca’s work to automate the process to determine the best damper layout – which is then tested against dozens of historic earthquake models. This world-leading approach enables a level of evaluation that would previously have been impracticable.

The optimised damper configuration means the building, now rated at 130%NBS (IL2), has significantly increased resilience to shaking than conventional strengthening work, without the complexities of costly retrospective base isolation – unrealistic for many of Wellington’s tightly packed buildings. It has also paid a large sustainability dividend, with the materials used in construction substantially reduced and thousands of tons of concrete retained, rather than sent to landfill – demonstrating a low carbon way of delivering high performance structural retrofits.