In the spring of 1906 a middle-aged artist sat halfway up Thompson Street with a small board balanced on his knees and a palette of oils at his side. The shades of greens he used for the quiet residential street gave way to the purples and grey of industrial Te Aro, and a skyline dominated by brick chimneys belching black smoke into a clear blue sky. 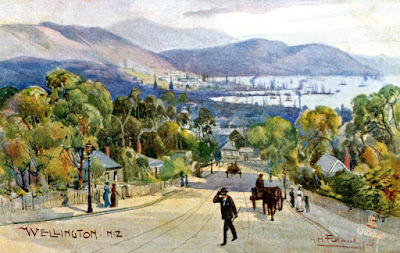 He paused to exchange some words with the driver of a horse and trap slowly clip-clopping up to Brooklyn. Decades of painting landscapes under the unrelenting Southern Hemisphere sun meant Albert Henry Fullwood’s skin was leathery and wrinkled, and thick black hair and beard added a certain wildness to his demeanour. But the speed at which Wellington materialised on the canvas was evidence of a master commercial artist working on a tight schedule to feed the first truly global craze: collecting postcards.

The city Fullwood arrived in was the bustling, confident capital of a young country that had rejected joining the Commonwealth of Australia five years earlier – and Lambton Harbour was its focal point. Ocean liners carried passengers to the far reaches of the empire, while tramp steamers and barques worked their way around the coast – the ascendancy of fire over wind not yet complete. The yachts must have caught the publisher’s eye back in London, with an approving caption on the card’s back stating the number of boat clubs meant ‘like true Britons, all the inhabitants love the sport’. And the elegantly dressed women walking their dogs unaccompanied around the Government Buildings and Molesworth Street were good material for postcard sales in Europe, with the small print reminding the world of our universal suffrage: ‘Measures that have only been talked of in other countries have been in existence in New Zealand for years’. 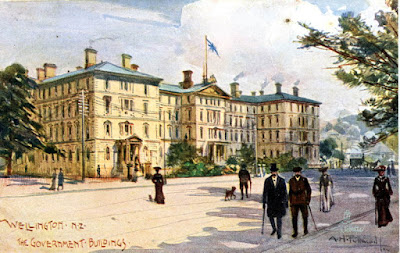 Fullwood’s streetscapes show the city (population 60,000) in the final year or so before the inexorable rise of automobiles – with pedestrians and cyclists mixing with horse-drawn carts. Wellington City Corporation had just taken ownership of the tram network, and the odd choice of Thompson Street for a city panorama was likely because of its proximity to the newly-opened route to Brooklyn. The electric tram would have passed hundreds of workers’ cottages packed into Te Aro Flat’s lanes – the harsh conditions of inner-city living were only a decade after the typhoid epidemics that ravaged Wellington and drove people to the safety of neighbouring boroughs like Karori. The Kelburn cable car and the Town Hall (opened in 1902 and 1904 respectively) didn’t interest him – a cynic would note the abundance of harbour and waterfront scenes were easier pickings for someone arriving by ship with little time to spare. 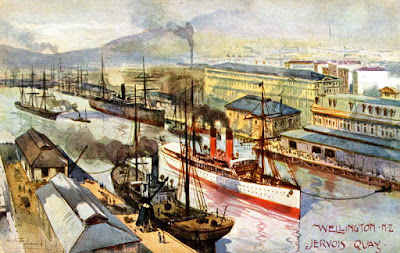 Fullwood was born in Birmingham in 1863 and emigrated to Australia aged 20. He spent his next three years travelling as a staff artist for the Picturesque Atlas of Australasia, and the range of places he visited during his early career was extraordinary: Thursday Island, Torres Strait, Port Moresby, New Guinea, and later New Zealand. He married Clyda Newman in 1896. By then two of his paintings had been purchased by the Art Gallery of New South Wales.


The economic downturn and collapse of the Sydney art market at the end of the 1890s was a catalyst for travels further afield. Fullwood took his wife and their two small boys to New York, Europe and Cape Town in 1900 before setting up home in London (and having another child; a daughter) – just as the world-wide postcard craze was hitting full swing. 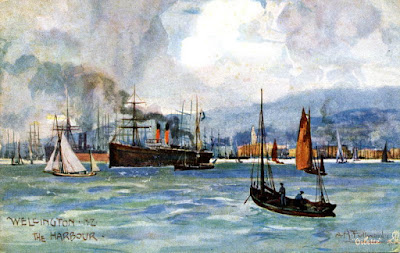 Collecting cards was a phenomenon in the decade before the First World War, and Raphael Tuck &amp; Sons – a postcard publisher owned by a London-based Prussian Jewish-émigré family – were one of the biggest names in the business. In 1899 the company persuaded the British Postmaster-General that cards should be a standard size with both message and address on one side and the other side free for artwork, creating the postcard we are familiar with today – and the first truly mass media. Tuck’s ‘Wide-Wide-World’ series was launched in 1905, with bright, colourful ‘Oilette’ cards printed in Bavaria (the Tucks didn’t rate British colour printing) and exotic themes like ‘The Arctic Regions’, ‘Pleasure Resorts of Sydney’ and ‘Native Types of India’. The Oilettes were sold in sets of six scenes (half a shilling a pack) and promptly became highly collectable.

The extension of ‘Imperial Penny Post’ rates to New Zealand in 1905 helped Wellingtonians swap cards and news with friends and relatives back in the Mother Country for the equivalent of about $2 at today’s rates. Cheaper than telegrams and more widely available than telephones, the volume of mail exploded, with our post service handling 7,500,000 cards in 1909, a figure dwarfed by the estimated 1,000,000,000 cards posted in America at the same time. The General Post Office on Customhouse Quay must have been a hive of activity. 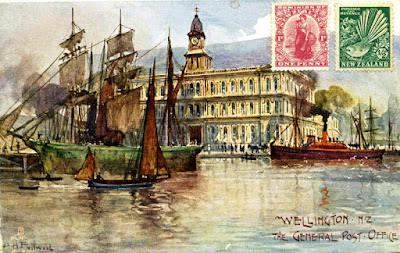 Like any rage there were detractors – Punch magazine said letter writing was being killed, mail carriers complained of exhaustion, and religious leaders condemned the ‘plague’ of cards. But it was good business for artists: the interest in collecting cards meant Tuck’s range had extended to a staggering 80,000 different cards by the time Fullwood settled his family in London. The postcard company promptly sent him back to the Antipodes to capture more scenes for the ravenous trade: the range of Fullwood’s scenes published in the 1907/08 series suggests he worked to a tight schedule in each of the cities he visited across Australasia, possibly staying in each city for two days or less. Ultimately he completed 130 Oilette scenes for Tuck.

Postcard mania carried on unabated until war broke out with Germany in 1914. Fullwood – by now in his 50s – served in the Royal Army Medical Corps and ended up as Official War Artist to the Australian Imperial Force. His wife Clyda spent time in mental asylums before her death in 1918, and two of their children died at a young age – but Fullwood remained prolific until he succumbed to pneumonia in 1930. While never critically rated, his work was exhibited extensively during his lifetime (with multiple showings at London’s Royal Academy) and numerous paintings are held in Australia’s major state galleries. Raphael Tuck & Sons’ final hurrah was printing cards with secret escape maps for POWs during World War Two, with the destruction of the head office and artwork archive during the Blitz additional motivation for their work. The family sold the business in the late 1950s. 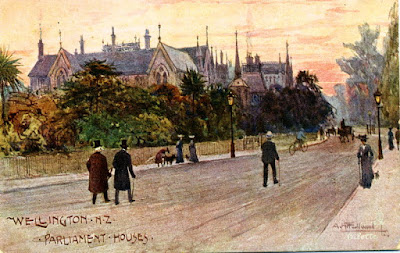 Fullwood’s depiction of Wellington didn’t last long. The fire that engulfed much of the Parliament Buildings in December 1907 would have happened months after Tuck published the set of Wellington cards. One card in my collection has the message ‘The houses here shown were burned four weeks ago, at present we have no Parliament House’.

The spectacular General Post Office that towered over the adjacent masts and funnels was demolished in the 1970s, with the InterContinental Hotel building taking its place – progress, apparently. The waterfront scenes that caught the artist’s eye are a tantalising glimpse of the commercial bustle on Queens Wharf’s ‘inner T’ (now lost under the TSB Arena) that ebbed away with the rise in air travel and containerisation in the 1960s. But Fullwood’s talent for capturing cityscapes means the Wellington shared by postcard collectors over a century ago is still recognisable today – most of all, we are still a city of walkers.

First published in the November 2018 issue of Capital magazine