Crossrail 2 is the next of London's infrastructure megaprojects – it's a new underground railway line that will run north/south across the city, and relieve the Northern line and railways running though Clapham Junction. It'll take nearly 20 years to deliver, with the first trains estimated to be running around 2030. But it will transform large parts of London – including my patch, Wandsworth, which despite being in Zones 2 & 3 has poor connections into Central London (and partly explains why we have such high levels of cyclists).

The new line has included a station at Tooting Broadway since the route was initially put out to consultation in 2013. A station in Tooting makes a lot of sense as it's at the bottom of the Northern Line, and the area is ripe for regeneration: improving transport connections will unlock new housing.

My friend Dan Watkins – the Conservative candidate in the 2015 General Election – has led a strong campaign to put Tooting on the Crossrail 2 map, so when we found out last month that Transport for London was considering moving the station to Balham we decided to launch a campaign to engage the local population and see if there was support for a campaign to keep the dream of Crossrail 2 at Tooting Broadway alive.

Normally the Wandsworth modus operandi would be to do a combination of door-to-door petitions and email out a link to a Survey Monkey site. This time I suggested we did something different, so my friend Ben Guerin (an ace web developer) got to work on building a website aimed at raising awareness that there was a choice between the Balham and Tooting routes. I designed the graphics and finessed the text. We haven't spent any money on social media advertising.

I also designed a leaflet that was delivered to all homes within walking distance of the stations – and at early morning raids on our local tube stations. The effort to get tens of thousands of leaflets delivered in the space of a week was immense – so well done Dan and team on the ground.

And of course Dan followed up with local residents who signed the petition. 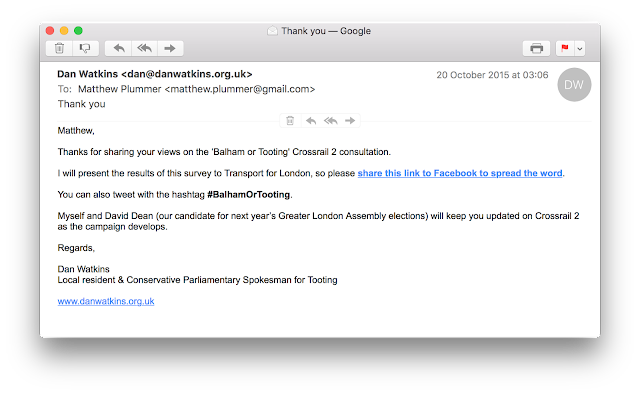 The results have shown strong support for the station at Tooting Broadway – which is unsurprising given that Balham is a lot more gentrified, and two stops closer to Central London on the Northern Line. Tooting will have to endure a more intrusive construction phase, but the benefits are much, much greater.

What I did find interesting is how support for Tooting Broadway extended in the areas close to Balham station – I used to live in the Heaver Estate area and would walk to Balham if I was catching the tube into town. A station at Tooting Broadway will see some people from Balham and Tooting Bec travel southwards, so perhaps these results are not that surprising after all.

Here's the infographic I produced which summarised the results. I also produced a version for social media (this required slightly different formatting). I love data – so laying this out was a real treat. 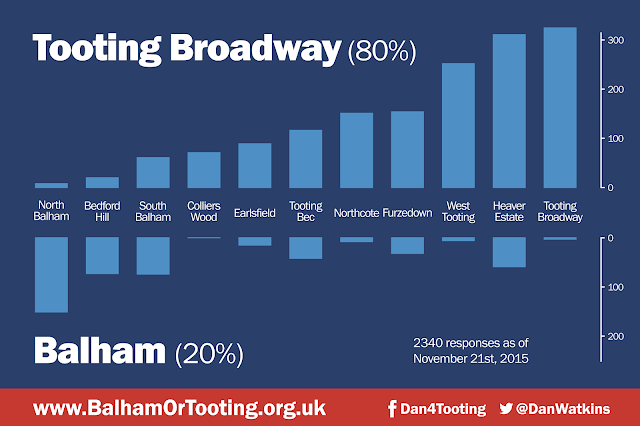 The campaign also helped raise the profile of Dan's work in the community, particularly around Tooting Broadway, where Labour has been historically strongest. I was surprised that local MP Sadiq Khan was so slow off the mark – after all, it's a crucial issue for the future of Tooting. Others noticed this too... 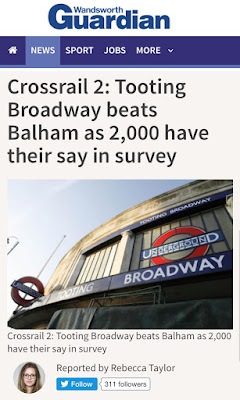 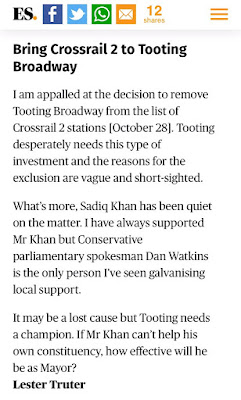 We're thrilled with the results, with a substantial majority of the 2500 people signing the survey living in Tooting. It's helped engage people with Crossrail 2's more detailed consultation – having filled out a number of these I know they're usually the domain of the more determined. And that's the point about politics, right? Yes we need politicians to champion causes, but change happens when whole communities are engaged and mobilised.