Four months of campaigning in Latchmere, AKA Operation 'Snatch the Latch'

I've had a few days to digest Wandsworth's 2014 borough elections – and my first time standing as a candidate. That in itself was hugely exciting as being able to tell someone that I will do my best is infinitely better than saying that I'm calling on behalf of John / Joanna Bloggs, who is / will be a great champion for their community, etc. It was a fun campaign, and I managed to get a few things done for people who were of the 'I'm not voting because you're all as bad as each other' persuasion - and hopefully changed their minds. But with a 35% turnout the reality is a lot of people just don't care about having their say in how the local council is run, which is a pity, as most of the services they use on a daily basis stem from the Town Hall rather than Westminster.

I was selected back in... February, I think? It seems like an age ago, but actually wasn't that long – and certainly not long enough to loosen the grip that Labour has on Latchmere, a ward that has never elected a Tory councillor – not even back in the days of 0% Poll Tax, when my friend Tim Loughton took Labour's majority down from 1500 to 300. Operation 'Snatch the Latch' was always a bit of a long shot. My result saw us hold our share of the vote at 2010 levels* (despite our government now sitting just behind Labour in the national polls), but I came fourth, just under 700 votes behind the last of Labour's three candidates. I campaigned hard, but it wasn't enough, and the sole consolation is knowing that we managed to tie down some of Labour's resources that would have otherwise gone to the neighbouring battleground ward where we squeaked in two councillors in a very tight contest.

There were some wonderful moments during the campaign. I made new friends, met people with fascinating stories and was occasionally distracted from canvassing long enough to make the process feel more like an exercise in getting to know a community than simply compiling a database on how people would vote. A woman told me about growing up in the slums that were cleared where the Winstanley Estate is now, and about how her grandfather remembered Battersea before it was heavily developed. Latchmere Road back then was simply a dirt track known as 'Pig Hill' and used as a route for taking livestock from Clapham Common to the market. One guy told me he'd be voting Tory because 'you don't solve a cost of living crisis by fixing prices – you do it by taking less money from us in the first place' – I should have passed his details on to Lynton Crosby. Another woman – previously canvassed as 'strong Labour' (but married to a 'strong Conservative') told me that 'Maggie Thatcher abolished me, but you seem lovely and so you can have a hug'. Apparently riding a fixie makes me 'far too cool to be a councillor'. And then there was the time I was biking down Sheepcote Lane on my way home from some canvassing, when a large A4 Pacific steam locomotive rushed past – an amazing sight, and almost up there with the view from the 20th floor of Dresden House.


Election day was madness – albeit carefully planned madness. I was humbled at how many of my friends came to help, and the memory of them 'knocking-up' our supporters in Battersea Fields and on the Winstanley will stay with me for a long time. I'm normally a fairly sedate cyclist, but I'm still a little amazed that I didn't have some horrific smack on May 22nd as I hared between polling stations, campaign teams and our committee room. Note to self: if standing for election again take extra shirts for polling day, as one of the Labour candidates told me afterwards that she'd thought I was a well turned out bloke in a tweed jacket, and was surprised when I showed up at the count looking like I'd run a marathon in my shirt, jeans and converses. We started at 5am, and by the time I got to the count I was – suffice to say – exhausted, but not so tired that I couldn't keep up the family rule of having a drink with the opposition once the results were announced. I'm sure this raised some eyebrows on our side, but it's a good tradition as it means you need to fight a hard – but fair – campaign, and ultimately we're still all residents of Wandsworth once the elections are done and dusted. And this is how I came to find myself playing fußball with Battersea Labour's parliamentary candidate Will Martindale and their organiser Sean Lawless as dawn broke on Friday, with one of their activists (clearly a Blairite) lumped together with me as 'Team Tory'. They are decent people who just happen to be profoundly wrong about how we build a better community and improve people's living standards. Labour beat us on the night, but we'll bounce back stronger – after all (as I pointed out to the comrades at 6am) that's what the markets are all about: good, healthy competition driving us on to better things.

* Apparently our result in Latchmere was the best of any opposition held seat in Wandsworth. 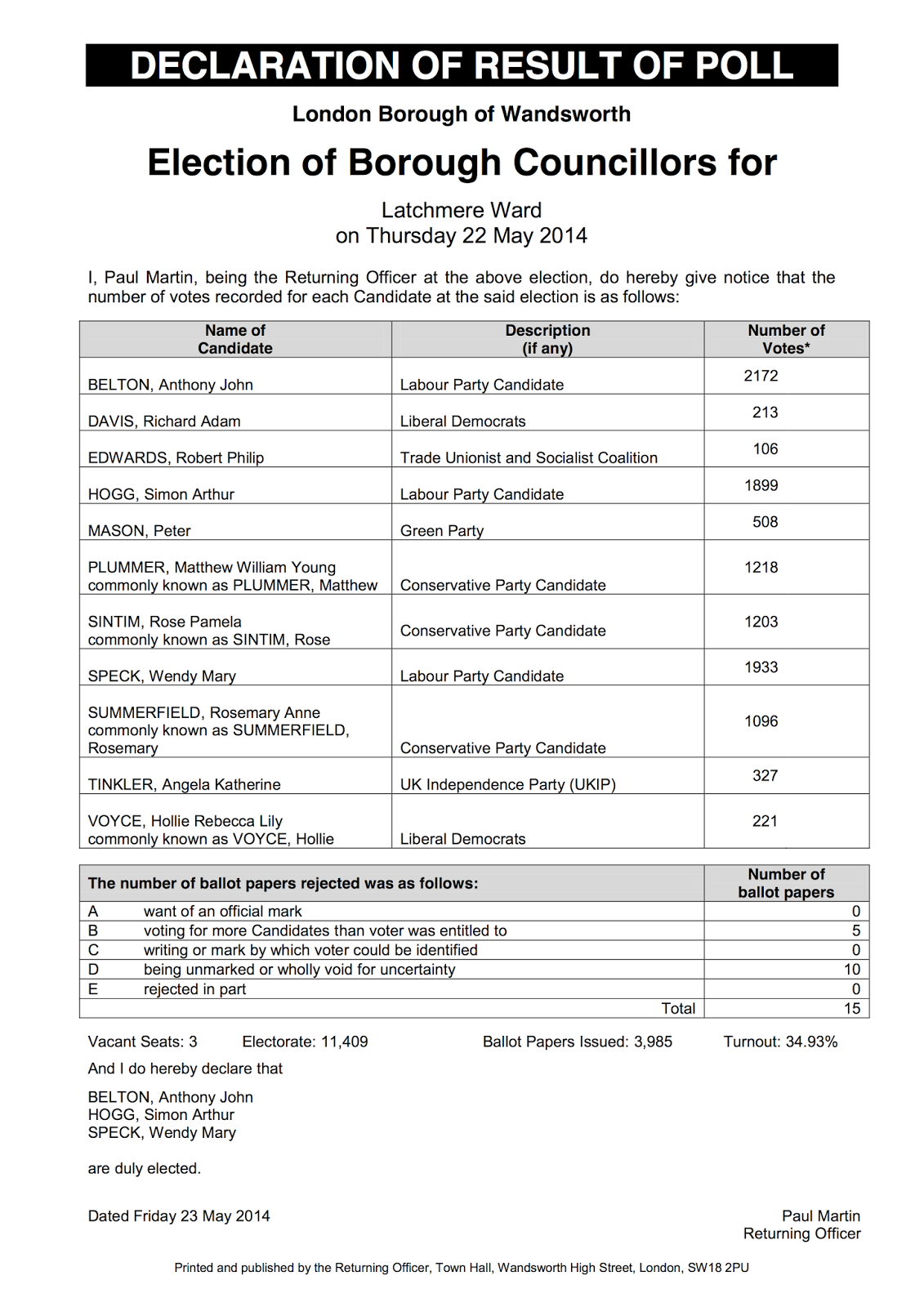