I wrote this piece for the Ampleforth Lourdes Pilgrimage's 2009 fundraising carol service to explain why I had joined them that year to take photos. I've been back to Lourdes with them each year since, travelling as my disabled cousin's carer, and continuing to document the Pilgrimage's work. You can see a slideshow of the work I produced from 2009 here.

Most of the Ampleforth pilgrimages to Lourdes since 1980 have involved one (or more) members of my family. This year there were four of us. The Plummer clan's previous would be reasonable grounds for suspecting me of a) having an interest in cameras, and b) being a committed Lourdie. Rewind three years though, and things were rather different.

Dad's Catholicism is half-hearted at best. Likewise, the one time I remember him with a camera was shooting five minutes of video in the Disneyworld carpark before realising the lens cap was still on. Mum is agnostic, the result of attending Wellington's Convent of the Sacred Heart school, where the nuns excelled in producing well educated women with little interest in God. Both made huge sacrifices to give me a fantastic education, which I mention to balance the distinct lack of enthusiasm they had for my early attempts with a cartridge film camera given me for my 6th birthday. I can clearly recall Mum saying that she wasn't buying me any more film because all I did was take dull pictures that were a waste of money to develop. Looking back, she was right.

In the following two decades my contact with Catholicism was pretty much limited to Dad's insistence that I received my First Communion. I remember filling my gold-covered communion workbook with drawings of the Space Shuttle Challenger disaster and Richard Branson's trans-Atlantic speedboat, so it's a safe bet to say the date was late in the summer of 1986. And in retrospect my first confession of 'being mean to my sister' seems rather sweet. 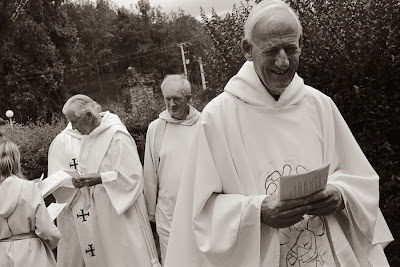 But as I got older something about God didn't click, and I was lucky that my housemaster at Westminster was sympathetic to my boycott of school church services. And having talked to Dad about belief I decided that enough was enough. I walked up to St. Augustine's – where I had been christened 19 years earlier – and told the bewildered Father on duty that I'd come to resign from the Church.

At this point a pilgrimage to Lourdes seemed an unlikely prospect. But with my parents working full-time I'd grown up spending a lot of time with my aunt Elizabeth Plummer and her boys Rupert, Mark, Andrew and Richard. Trying to figure out why people I loved (and who I considered sane) were interested in what Mum described as 'a week of God-bothering and anointing each other in the fields' was a tricky one. A detour though Lourdes during a camping holiday in the Pyrenees – and the abiding memory of umpteen gift-shops selling plastic Virgin Mary waterbottles – added to the confusion.

And so to the 21st Century. Digital cameras meant I was free to learn and experiment with my photography, and 12 months ago I finished two years of photography school. My final year was spent documenting New Zealand's newly decriminalised sex industry, and it dawned on me that the camera is a powerful tool for accessing places that are far from the everyday. Personal projects are a key part of a photographer's portfolio and career development, and so with my cousin Rupert's encouragement I rang Anna Mayer [the Pilgrimage Director]. For me, the week would be a chance to finally see Ampleforth's pilgrims at work, and in return I'd offer the Pilgrimage a detailed visual record of 2009 in Lourdes. Having been given the green light, I remember Richard chuckling when I asked him if we'd be attending Mass more than a couple of times during the week.

45 rolls of Kodak Tri-X later, and with a month of developing and scanning late into the night, I have a much better idea of what the pilgrimage is about. Lourdes is a wonderful place, where people (if not gift shops) are at their best. I don't think my views on God have changed, but the profound impact of Jesus as a teacher of decency and kindness is manifest. The patience and humour of the sick and healthy together is wonderful, with the ward party on the final night unexpectedly moving. Being a pilgrim with Ampleforth this year was a privilege – thank you!